You can also check out the track list and lyrics here.

Thirty years ago Brain Size 61 was hatched. Born from the minds of the Hutchins brothers, it’s a stew of punk, rock and metal. A luscious blend of deranged combustible musical energy. The rules have been simple right from the get go, it had to be loud, fast and fun. Stories, struggles and crushed dreams wrapped up and ready to rumble. They’re still at it, going strong and kicking ass. This is the best of so far. Remastered for your earsplitting listening pleasure!

Turn it up and let the music do the talking! 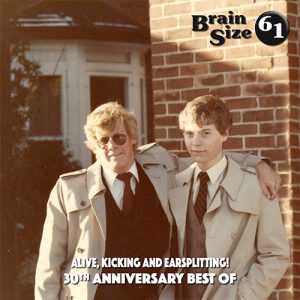 Check back for more shows! 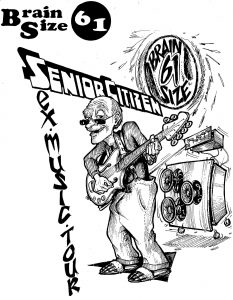 Brain Size 61 is classic rock power chords, scorching guitar solos and smart sly lyrics coming at you fast and ferocious. Originating from and based in Montreal, Canada, the band members are a dynamic mix of age, gender and influences creating an unrelenting combustible musical energy. The music is powerful, intense and lusciously deranged leaving the listener breathless but always wanting more.

The 2020 release “Bonsai Hemlock” is the band’s fourth album on the Milagro Records label and builds on the previous success of “Influence” (2017). Brain Size 61 songs have been streamed thousands of times on multiple platforms in almost every country on earth. They have also received radio airplay worldwide including in Canada, the U.S, U.K., Spain and Brazil. Two of the videos from “Influence”, ‘Got My Eye On You’ and ‘Monkey That Got Too Smart (Redux)’ got significant airplay on Canada’s Stingray Loud music television channel. Their first album “National Pinecone” (2007) launched them upon the world with a collection of daring, gutsy hard rocking tunes including fan fave “Catharsis” that gained them notoriety in China. “Home Invasion” (2012) followed up with more smart songwriting, big guitar sounds and hard, loose, rhythms. There have also been featured tracks released on compilation albums in the U.S. and U.K. over the course of their career.

“Bonsai Hemlock” unleashes eleven sizzling rock tracks coming at you with the unbridled energy of a runaway locomotive. Recorded, mixed and produced by April Hutchins at Muffin Studios in Montreal Canada, “Bonsai Hemlock” harnesses the intensity and edge of the live band persona. Mike Hutchins signature scorching guitar solos and Stuart Asprey’s thundering drum kit. It’s all topped off with Craig Hutchins smart, sassy and socially visceral lyrics Brain Size 61 is known for. Hold on tight, it’s going to be a wild ride!